For the 11th consecutive year, Kewley was invited by the Australia Day Council of NSW to be an Australia Day Ambassador, a job which he relishes. 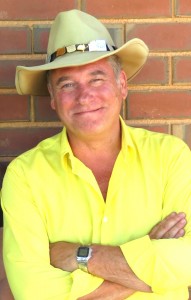 On Friday January 25th he took a break from shooting THE LEGEND MAKER in Melbourne and flew up to Mildura, then picked up a hire car and drove 162 kms to the outback NSW town of Balranald, situated on the banks of the MurrumbidgeeRiver.

The following day – Australia Day – he gave his Australia Day Address in front of large crowds at both Balranald, and Euston, which is on the banks of the mighty Murray River.

The following day he took a 150 km car trip out to Lake Mungo. Scientists have discovered artefacts of Indigenous Australians at Mungo dating back over 50,000 years across the expanses of the last ice age, making Mungo one of the oldest places outside of Africa to have been occupied by modern humans since ancient times.