The critics have been unanimous  in their praise for Mockingbird Theatre’s production of EQUUS, and for Kewley’s performance as Martin Dysart. Here’s a sample …

…This is theatre at its finest; an astonishing collaboration of text, performance and direction. To be prosaic, it’s bloody marvelous  …  Scott Middleton (Alan) and Jeremy Kewley (Dysart) give us performances that should be seen by every theatre-goer everywhere  …  Both these a 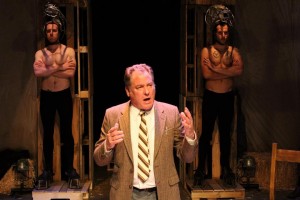 ctors reached for a place uncharted, somewhere above excellence, and they landed intact, though many of the audience, like myself, were shattered and in tears  …  I have never seen Equus played with such intensity, power, rawness and vulnerability. Kewley’s Dysart is heart-breaking  … I’ve always known Kewley was a GOOD actor…. solid. But until last night I never knew he was a GREAT actor, inspirational and astonishing, and I feel honoured to have been there for that performance … an offering that is so close to perfect … Its haunting beauty will stay with you for….well, until the next Mockingbird production. If you see one play for the rest of the year, make it Equus. (by Coral Drouyn for Stage Whispers magazine)

SUBLIME! – nothing more needs to be said! … Equus surpasses all expectations. Mockingbird have proven yet again that they are the independent theatre company to watch!

Exquisite direction by Chris Baldock, the presence of the horses for the duration of the play and the subtle way they portrayed what was going on in Alan’s (Scott Middleton) head was genius, the costumes, set, lighting, sound…and performances are breathtaking, raw and honest. It feels like there are six horses on that stage and it’s a credit to each and everyone of them for embodying the animal so beautifully. And thank you for your amazing work Jeremy Kewley! I could go on but words won’t do it justice just MAKE SURE you see this show! 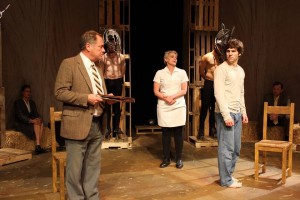 Last night I saw some of the best, most powerful and touching theatre I have seen in a long time. Chris Baldock’s Equus is a total must see! The pain and anguish that Scott Middleton brings to the stage as Alan Strang is heartbreaking, and the emotive compassion of Jeremy Kewley as Dysart is compelling. I have 3 or 4 other productions of this show, and have even seen Simon Callow as Dysart, but this is by far and away the best production of it I have ever seen. The horses were powerful and subtle and absolutely terrifying in the final nightmarish scene. Congratulations to the cast and crew and Chris Baldock. You are sitting on one helluva play! To everyone else, go see it! (Antony Okill)

I went to the opening night of Equus on Saturday at the Brunswick Mechanics Institute….. I was completely blown away. Wow, what a production! It sent shivers down my spine! It has all of the right ingredients for powerful Theatre. The performances and the writing were so engaging, I was riveted from the off. The lighting and sound were bang on. For me, there’s nothing more powerful on stage than a strong, focused and tight ensemble, those horses were a stroke of genius on Chris Baldock’s part and deftly played by the actors. In parts, it felt like there were real horses on stage. And the individual performances of the leads were spot on. So impressive. Amanda McKay, Soren Jensen, Sally Tatterson, Maggie Chrétien, Jeremy Kewley and without doubt the finest performance I’ve seen from an actor here in Melbourne, Scott Middleton. Congratulations to the entire cast and crew of Mockingbird Theatre……utterly brilliant.  You’d be mad to miss this!! (Adam Ward)

In Chris Baldock’s exceptional production, we see the besotted young man locked with the cast by turns (outstanding 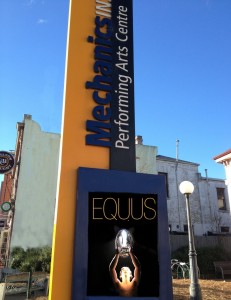 Dylan Watson, Kellie Bray, Elijah Egan, Thomas Kay, Damien Harrison, Tilly Legge all fitted with a vivid, wire, horse head) in a tender embrace like canoodling couples.  Scott Middleton’s Alan worships the spirit of the horse, Equus … The talented actor captures both the wide-eyed innocence of plain fervour and the brittle, deeply traumatised, nature of the teenager with stunning effect … his mother, deftly drawn by Amanda McKay, blames the Devil for Alan’s emotions-fuelled behaviour  … his father, cogently executed by Soren Jensen, denounces religion to be the ultimate culprit, without acknowledging his own secret desires … Maggie Chrétien, who plays Jill … puts up an actorly eloquent performance. But it is Jeremy Kewley’s Martin that is most memorable, nonetheless. In his impassioned dilemma, the psychiatrist, who endures an insouciant relationship with his wife, sees himself as a masked surgeon carving up children and cutting away their souls, just so that they will be free from pain, and seen to be normal in the “spiritless waste” around them. He finds himself confronting Alan’s passion, Equus, that questions and accuses his profession … Mockingbird Theatre’s staging of this superb play would not be what it is without Baldock’s superlative vision. His consummate direction, with Jason Bovaird’s emotive lighting and Natasha Moszenin’s haunting soundtrack, see not one stilted moment. But, above all, it is his ingenious ability to draw us hook, line, and sinker, into both Alan and Martin’s most intimate sanctums that is utterly breathtaking. Sir Shaffer should see this, see how Baldock must have fulfilled his theatrical object in every intricate way. And so should all of us! (Vera Poh)