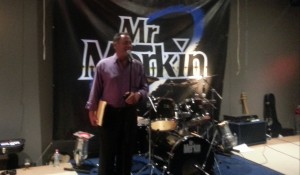 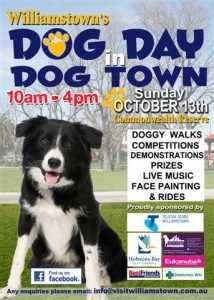 He was at Williamstown on Sunday October 13th to host the annual DOG DAY IN DOG TOWN event for the Hobson’s Bay City Council.

On Friday October 18th he was at the Bentleigh Football Club running a fundraising Trivia Event for the Bentleigh West Primary School. Lending a hand was Channel Nine’s veteran newsreader Peter Hitchener. Over $5,000 was raised during this fun and entertaining evening.

On Saturday October 19th, Kewley was at the Mordialloc Sports Club, hired by Shane Jolly and Mark Philp to MC an event to raise money for their participation in the RIDE TO CONQUER CANCER, which raises money for the new Peter Mac Cancer Centre.

Best mates Shane and Mark are about to set out on the annual 200km bicycle ride from Albert Park to Hastings on the Mornington Peninsula (where they will stay overnight in tents) and then a return ride to Albert Park the next day. A couple of thousand riders take part in the RIDE TO CONQUER CANCER and each participant has to raise a minimum of $2,500 each.

The evening  featured stand-up comedy for John Burgos, a Silent Auction, a Live Auction, and a performance from the band Mr Merkin. Shane and Mark raised well over $10,000 during the evening!

In 2012 the RIDE TO CONQUER CANCER raised a total $6.8 million in Melbourne alone, making it the single largest fundraising event in Australian history.