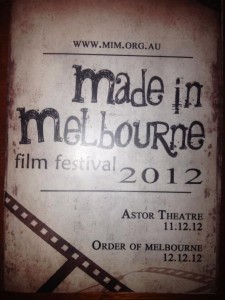 On Tuesday December 11th Kelwey hosted the fourth annual MADE IN MELBOURNE FILM FESTIVAL at the fabulous Astor Theatre (built in 1936) in St.Kilda.

Nine films screened in competition (all made in Melbourne – obviously!), with the packed audience judging the ultimate winnner which was … (drum roll) … Grant Scicluna’s THE WILDING.

Kewley was very impressed with the film RESISTANCE, made by the clearly talented Blake Borcich, a 17 year old student from Xavier College who has very bright future ahead!

A film that Kewley appears in – RESTLESS LEGS – screened the following night in a ‘Best of the Rest’ selection, and went on to win Best Film.