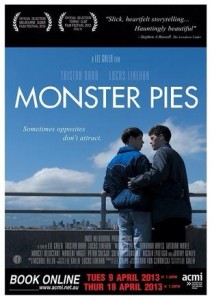 The story of a blossoming – but ultimately tragic – love affair between two schoolboys (Mike and William) stars Kewley as Mike’s father, Mr Allen.

Playing to a packed house at ACMI Cinema 2, the film was very well received at the MQFF premiere screening, which was followed by a Q&A with Cast and Director.

MONSTER PIES screens at ACMI Cinema 2 again on April 9th and 18th. It has been picked up for distribution in the US and the UK.