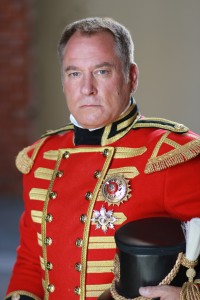 On the morning of March 7th, Kewley donned the offical outfit of NSW Governor Richard Bourke to recreate the “Naming Of Melbourne” ceremony which took place on March 7th 1837 … 167 years ago!

Bourke travelled down to Melbourne to officially name the small settlement, naming it after the British Prime Minister of the day, William Lamb, the 2nd Viscount Melbourne, who came from the town of Melbourne in Derbyshire.

Kewley recreated his famous speech to tie-in with the launch of the book JOHN BATMAN: AN INSIDE STORY OF THE BIRTH OF MELBOURNE by Joy Braybrook. The event took place at ‘Places Victoria’ in Collins Street, just metres from the Batman’s Hill, where the original ceremony was held.

The event was attended by the Deputy Lord Mayor of Melbourne Susan Riley, and the MC was Robert Gottliebsen.