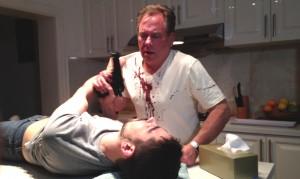 For the first nine days – straight – of September, Kewley was out (day and night) shooting short films.

He shot the ethical drama HOUSE CALL (pictured) in which he stars as surgeon Damian Noble who has an early morning home visit from an injured criminal (Philip Schizas) who demands – at gunpoint – to be operated on. 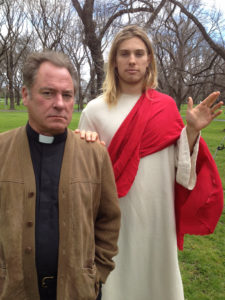 He completed CRUX for writer/director Kim Weiss as a Psychiatrist opposite rising star Stephanie Panozzo in the tale of a girl who is self-harming; starred as a Priest battling paedophilic tendencies opposite Sam Norbury (playing  ‘Jesus’) in PREY FOR LOVE, a film without dialogue for impressive VCA writer/director Taylor Beaumont-Whiteley.

There was also Julian Muzzin’s film COLOGNE, the complex tale of a boy (Caleb McClure) who is dealing with the death of his mother in a most unusual way;  TOO LATE FOR GOODBYES in which Kewley plays the violent father of a young boy (Samuel Edwards) in a film written and directed by Nora Hussein. 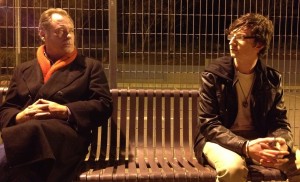 One of Kewley’s acting students Mitchell Hope cast him in his school’s VCE film LAST TRAIN TO ST.PETERSBERG.

Kewley plays the eccentric St Peter, meeting passengers on a railway platform as the take their last trip to the end of their lives! 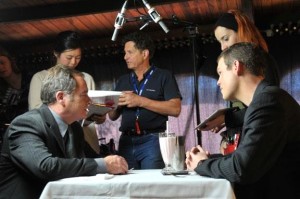