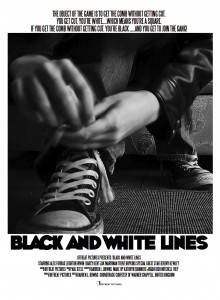 Directed by Darren L. Downs, the 25 minute film set in 1962 – which stars Kewley as brutal school teacher Mr Piper – was the opening night film at the festival at  the Scot Theater on the Campus of Edinboro University of Pennsylvania in the US.

BLACK AND WHITE LINES will also screen at the Long Island International Film Expo in July 2013 and at the 16th Annual California Independent Film Festival in San Francisco in Noevember 2013.

“After spending a few months in juvenile detention for an unacceptable schoolyard incident, Michael Cox (Alex Forass) has been placed at a new technical school for boys. But now, for disputing the judgment of Teacher Mr. Piper (Jeremy Kewley) during a Physics lesson, Cox has been unfairly made to attend a Saturday morning detention with an unruly bunch of youth who would rather play with knives and wreck school property than to learn to read and write. It’s exactly the sort of crowd Cox needs to avoid, but as the morning detention progresses, the other boys learn of a dark secret that will result in devastating consequences”.