Over Sunday and Monday September 9th and 10th Kewley held an exhaustive (and exhausting) casting workshop for the up-coming TAC film YES MUM.

YES MUM is being made for the “Make A Film Make A Difference” (MAFMAD) campaign. To screen in cinemas over summer, the powerful 2 minute film is being produced by Leah Hallis and directed by Jonathan Burton for Alex and Jono Films. 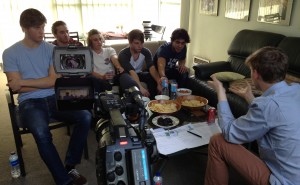 Kewley is acting as Associate Producer and Casting Director for the project,  and over 80 young actors attended the casting sessions at Kewley’s Pearly White Productions, all testing for the roles of ‘Andrew’ and his mates, who find themselves trapped in a car … and facing imminent death.

Over the two days, a lot of tears were shed – both by the young males actors, and by Kewley and the production team – as the performers completely immersed themselves in the desperate situation the characters find themselves. A physically and emotionally draining experience, but incredibly worthwhile, and truly memorable.