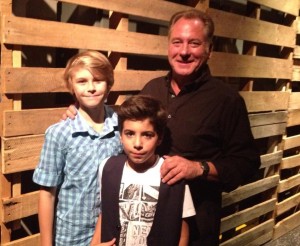 For the second year in a row, Kewley was the MC for the 11th Annual ANGRY FILM FESTIVAL.

Kewley was also one of the three judges on the night, along with film director Justin Dix (“Crawlspace”) and actress PiaGrace Moon (“Winners & Losers”), both pictured with Kewley (above).

The winning film was the Miguel Monteagudo film HUNGER from Spain.

Also in attendance – selling raffle tickets – were two of Kewley’s little acting buddies – Caleb McClure (who played Kewley’s son in the 2012 short film COLOGNE), and Javier Rodriguez (who is one of Kewley’s Acting Essentials students, and will appear opposite him in the forthcoming 2013 feature film THUNDER ROAD).