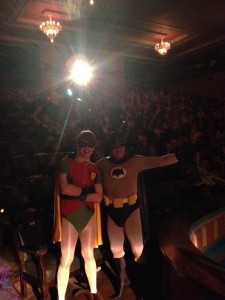 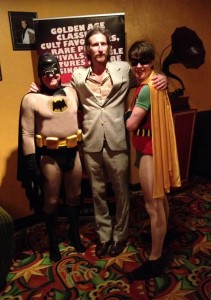 On Monday September 30th, Kewley was back at the fabulous 1936 Art-Deco Astor Theatre in St Kilda (Melbourne’s last remaining single screen Picture Palace) dressed up as the Caped

Crusader, hosting a special screening of the 1966 camp classic BATMAN THE MOVIE.

Along for the ride was young actor Ned Napier (one of Kewley’s former ACTING ESSENTIALS students and star of the new ABC/BBC television series THE WORST YEAR OF MY LIFE, AGAIN) as Batman’s sidekick Robin, The Boy Wonder.

A huge crowd turned out for the special screening – including You Am I lead singer Tim Rogers (pictured) – and prizes were given to those that came dressed in Superhero (and Supervillain) costumes.