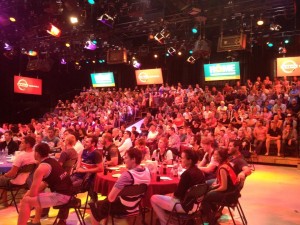 Kewley began working as the audience warm-up artist for THE FOOTY SHOW when it commenced  on the Nine Network in 1994. He was 33 years old.

On Thursday March 7th he was back entertaining the studio audience again as the popular ‘Australian Rules Football’ show returned for the first episode of its 20th season. And 20 years is a long time in television! Kewley is now 52 years old.

He has worked as the audience warm-up comedian on over 500 episodes of the show.

The first episode of 2013 was broadcast live from the newley re-fitted Sound Stage 5 at the Docklands Film Studios in Melbourne .