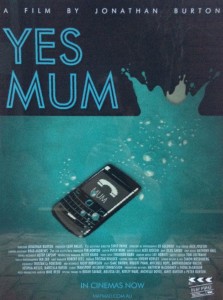 Selected as one of the two winners of the TAC ‘Make A Film, Make A Difference’ 2012 campaign (MAFMAD) was launched at Lifelounge in St Kilda.

Over December 2012 and January 2013 it screened in cinemas before films including SKYFALL, JACK REACHER and Russell Crowe’s THE MAN WITH THE IRON FISTS, as well as on television on MYV and Channel 11.

You can also see it on-line at:  http://www.mafmad.com.au/latest-winner/yes-mum