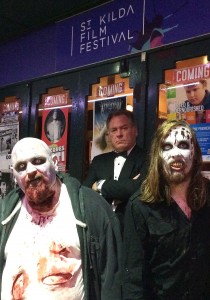 On Saturday May 24th Kewley hosted a ZOMBIETHON at The Astor Theatre. The 4 hour event (9pm – 1am) was part of the 31st Annual St Kilda Film Festival.

An enthusiastic crowd, all dressed up, watched the Australian zombie-themed short films KILLER ZOMBIES (1986), I LOVE SARAH JANE (2008), HOME (2010) and PERISHED (2011), along with over 40 trailers of classic British and American Zombie films, and a selection of music videos including Billy Idol’s DANCING WITH MYSELF (19890) directed by Tobe Hooper and the 13 minute Michael Jackson mega clip THRILLER (1983) directed by John Landis. 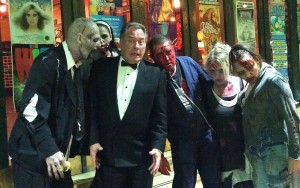