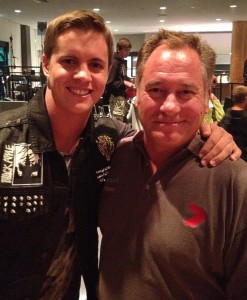 On Friday March 29th, Kewley headed back to Channel 7 to warm-up the audience for the Royal Childrens Hospital GOOD FRIDAY APPEAL.

This is the seventh consecutive year that  Kewley has been a part of the show, keeping the large audience entertained throughout the 5 hour live night-time broadcast.

As in previous years, a huge amount of money was raised – over $16.4 million!

Kewley caught up after the show with rising star Johnny Ruffo (left) who performed on the show.

Ruffo has been filming a guest role on HOME & AWAY, playing the brother of Andrew Morley, one of Kewley’s former Acting Essentials students.